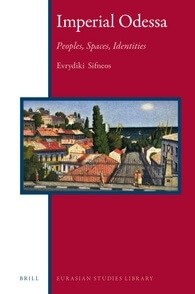 Imperial Odessa: Peoples, Spaces, Identities is a book about a cosmopolitan city written by a cosmopolitan scholar with a literary flair. Evrydiki Sifneos conceives Odessa as more of a fin-de siècle east Mediterranean port-metropolis than as a provincial port-city of the Russian Empire in the nineteenth century due to two of its principal characteristics: its function as a hub of international trade and travel, and the multi-ethnic character of its inhabitants. The book unfolds around two interpenetrating axes. The first one introduces a new "peripatetic" approach that discovers the space of the city; and the other, the one that has given it its dynamic, is the socio-economic transformations that germinated within the political changes.